The Hannigan family originate from Dromcolliher in the north of County Cork in Southern Ireland. John Lynch Hannigan emigrated in the late 19th Century working in Sydney, New South Wales, before working his way up to the North Coast.
Eventually in 1902 he rented our current property and then purchased it. 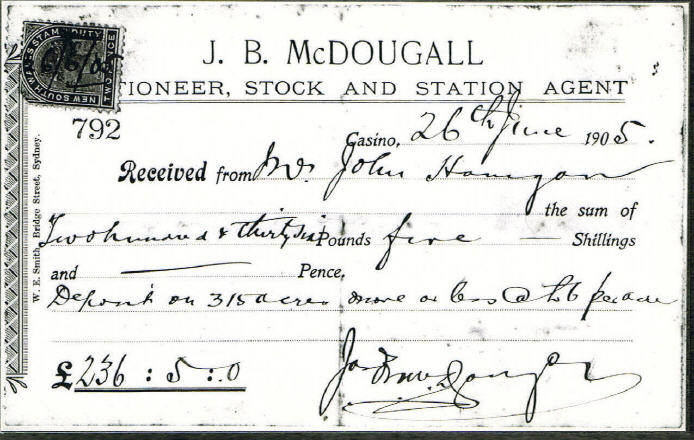 This is a copy of the receipt for the Deposit on the original farm which is dated 1905. John Lynch Hannigan was the father of 18 children, his first wife Sarah dying early in life, he then married Margaret. Francis (Frank) Joseph Hannigan was the eldest son from the second marriage. Frank Joseph Hannigan was the father of Francis (Frank) Gregory Hannigan the proprietor of Franco Hereford Stud.
Frank is the second youngest of 8 children. All 18 children of John, 8 children of Francis Joseph Hannigan and Frank’s 5 children have been raised on Avoca Vale. Frank and Lorena married in 1975 and they had 5 children, Nadene, Brett, Monique, Renee and Joseph. Sadly Lorena died on 6 March 2010. Brett is permanently attached to the Stud, and is a member of the Fourth Generation of Hannigans to operate at Avoca Vale. Joseph has now returned to assist with our stud.